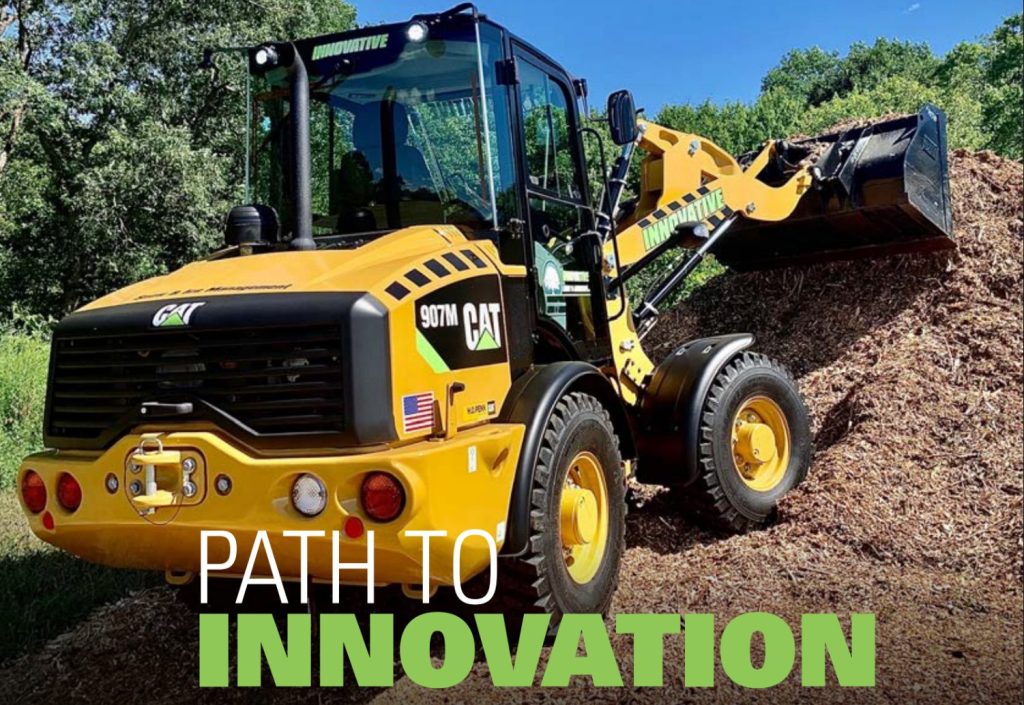 James Doyle’s path to starting his own business traces the familiar narrative of a hungry entrepreneur not content with his circumstances.

Fresh out of high school, he gained experience working as an equipment operator for a paving contractor that did milling work for the Connecticut DOT, while also doing landscaping work on the side in his spare time.

Due to the seasonal nature of the paving job, he came to the realization that he was cut out for bigger and better things. In late 2016, Doyle began to consider his options.

“It was a good job where I gained a lot of experience operating equipment, but eventually I got tired of punching somebody else’s time clock and getting laid off in the fall,” Doyle says. “I had always done a lot of
small stuff on the side—various projects for neighbors, friends and family—and learning the trade from other  guys in the landscaping industry.

“It got to the point where I lost a couple jobs due to not having insurance, and that was another eye opener,” he recalls. “It was fun to do it for quick weekend money. But if it was something that I really wanted to do, I had to be legit.

After considering his options, the 22-year-old launched Innovative Lawn & Landscape in early 2017 with a truck and trailer. Working the greater Litchfield County area from his home base of Torrington, Doyle outgrew his original setup within three months and began renting equipment to keep pace with demand.

By the end of first year, Doyle had cemented relationships with several commercial accounts for lawn care and snow removal, while also offering excavation and landscape construction
services.

This led to investing in more trucks and equipment, including the acquisition of a mini excavator which he financed in early 2018. But after making a year’s worth of payments, Doyle was still underwater on the loan. The cost to finance it was astronomical.

Enter Tim Schofield, a sales representative with Cat® dealer H.O. Penn who had already set Doyle up with a Cat 259D Compact Track Loader through Cat Financial. Schofield encouraged Doyle to sell the mini excavator, which he ultimately did. 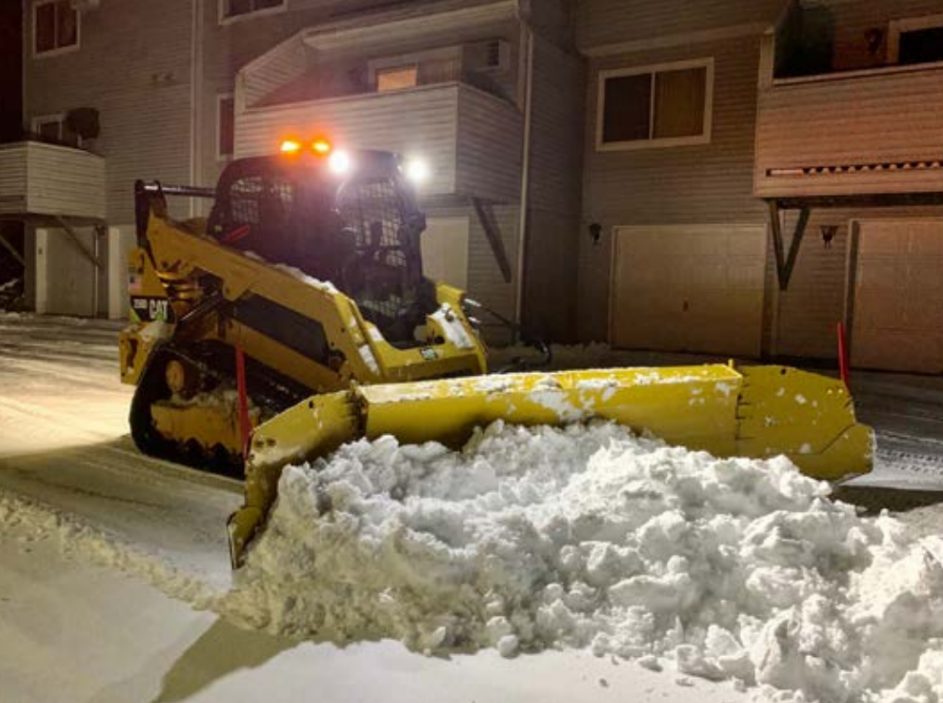 “He owed more on that machine than the initial amount of the loan when he started,” Schofield says. “I see this all the time.”

With the affordable terms offered by Cat Financial, Doyle purchased a 304E2 Mini Excavator to replace the departed machine.

“This enabled us to kind of magically pull the trigger and have the two Cat machines complement one another and provide the capabilities we need for snow removal, material handling and excavation,” Doyle says. “Working with Cat Financial, we got the deal done as quickly and painlessly as possible. You sign the document in an e-mail and within the hour the transaction is complete.”

In the meantime, Doyle continued to build the business by focusing on commercial accounts.

“I didn’t really want to do the whole residential home maintenance thing,” he says. “It’s too easy for other guys to come in and there’s too much competition at the bottom. So, I wanted to try to stay away from that.

“I try to keep everything as simplified as possible,” Doyle adds. “For the lawns in the condo associations that are maintained throughout the summer months, I want to be able to plow the snow there, too. Our guys know the properties because they’re walking them every day.”

In addition to the commercial lawn care and snow removal, Innovative will perform as many as 10 large-scale landscape installation projects a year, and will occasionally partner on jobs. In July, Doyle’s crew partnered with another contractor to provide excavation at a condominium complex in Torrington that involved reconstruction of an underground mainline drain system.

“We were able to do all the excavation with our Cat Mini Excavator, then haul the material away,” he says. “We had to move catch basin tops, cones and risers for manholes and paving rings.

By using our 259D Compact Track Loader and the mini excavator we were able to perform all of those tasks and make the job go a lot quicker. Our compact machines were able to maneuver in and around tight  parking areas and still allow traffic to flow and not create a shutdown for the residents.” 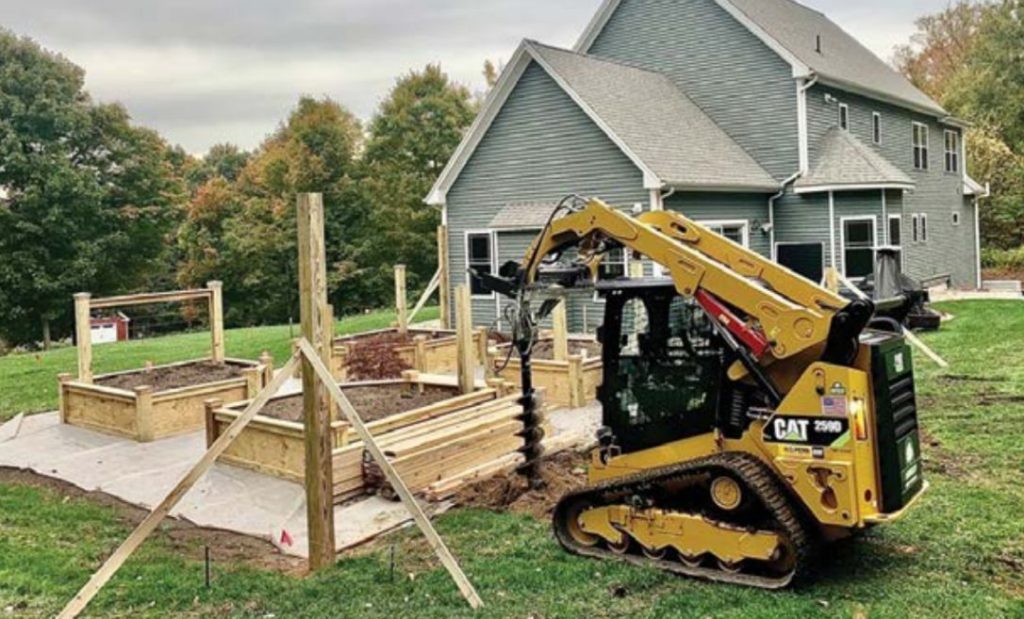 When it comes to Cat machines, Doyle is sold on the joystick controls and ease of operation.

“I have operated other brands, and they are not as easy to learn or operate,” Doyle says. “I wouldn’t want to put myself within a couple feet of a building without havinga lot of time on the machine,” Doyle says.  With a new Cat machine, I can put any one of my guys on it, and after a couple hours they can run it like an experienced operator. For somebody learning how to run a new piece of equipment, it’s very easy for them to  adapt quickly and get comfortable with the operation and the controls.”

He has come to appreciate the versatile nature of his Cat machines, as well as the reliability, which means less downtime—and greater profitability.

“Six days a week, these machines are moving constantly all over Connecticut,” Doyle says. “And they’re never at the shop, which is a good thing.”

He appreciates the prompt service he receives from his Cat dealer.

“No matter what the situation is, even if it’s 9 o’clock at night, my phone calls are answered,” Doyle says. “Since day one it stood out to me that as a Cat customer, their approach has always been ‘Hey, what can I do to help you with this?’ And that’s from my H.O. Penn rep all the way down to the parts and service department.

“At the end of the day if something breaks, I need to know who’s gonna be in my corner to help, and H.O. Penn has gone above and beyond for me.”

The 26-year-old Doyle represents the next generation of young contractors who want to control their own destiny.

“When somebody looks at a video or picture that we’ve posted and a week later they say, ‘Hey, we have this to do at our house. Who can we call?’ And when they think about that picture or that video that they watched five times, they’re going to call that guy because it’s familiar to them.

“Studies have shown that the consumer is more likely to go with something that’s familiar to them, even if it’s a third search on Google,” Doyle says. “People ask me why I take pictures and videos of everything. The reason is because it has advanced my business to the point where it’s just become the norm to showcase the work we do. You can try to sell somebody on something all day long, but if they can look at it firsthand and make a decision for themselves, it’s a lot easier that way.”

Innovative makes widespread use of attachments to complete its work in less time and save manpower. Doyle has an area of his shop that he calls “attachment island.”

Schofield says utilization of various attachments helps keep Innovative ahead of the game.

“James has a lot of strong traits. He realizes that there is severe lack of manpower in today’s market. He understands that the more attachments he has, the less reliant he is on manpower to get jobs done.

“He has really capitalized on that and I have seen firsthand how the use of attachments has increased his productivity to the point where his company is three to four times more profitable than in previous years.”