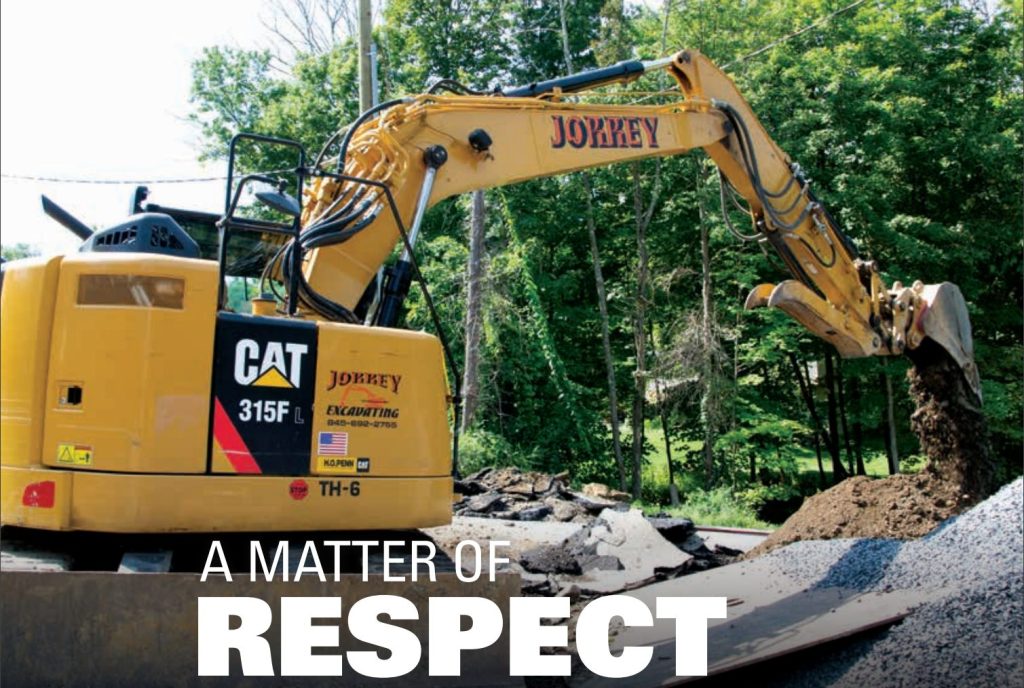 Chris Jorrey’s first exposure to the construction business began at age 5, when he would tag along with his dad on highway jobs in New Jersey. He recalls sitting in an old Cat® 225 Excavator and being lulled to  sleep as the machine worked.

As a youth, Jorrey accompanied his dad to various jobsites to the point where he knew just what he wanted to be when he grew up—a construction contractor. While he was technically not old enough to start a business, he embarked on that path in 2004 at the age of 17 with financial help from his mother, who bankrolled several equipment acquisitions from an inheritance she received.

But their first foray into owning equipment was a sobering one. Having done business in the past with a local equipment dealer that serviced their old backhoe, the pair walked into the shop and were greeted with seeming indifference.

“It was raining, and the woman told us ‘If you’re interested in something, there’s a bunch of stuff outside and you can go look at it,’” recalls Mary Jorrey. “It was insulting. So, I told Chris that we’re getting in the car and we’re leaving. We ended up heading to a new H.O. Penn Cat dealership location that had just opened in Bloomingburg.

“So here we were, a woman and a soon-to-be 17-year-old walking into the Cat dealer’s new store and shop location,” Mary continues. “From the moment we walked in, they treated us with respect, like we mattered. We bought a Cat 315 Excavator that day, and we haven’t purchased anything but Cat equipment since.” 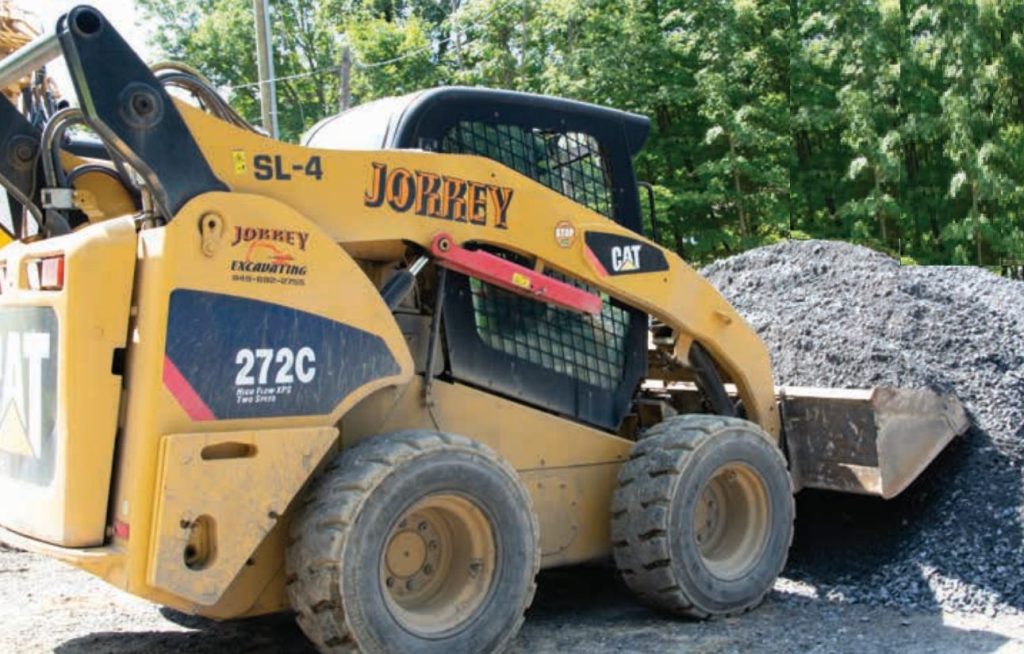 As president, Mary handles all the administrative work. That includes all the bookkeeping, insurance, financing, contracts and payroll. Chris manages the equipment fleet and coordinates work in the field.

Jorrey Excavating also employs an estimator, who plays a key role in bidding jobs and developing strategic plans in preparation for upcoming projects.

“To win bids, we need to demonstrate that we’re going to be on time and on budget,” Mary says. “The competition for jobs this year has been fierce. We’ve bid jobs where there’s 20 bidders, and in a normal year there would be five or six. On top of that, materials cost more now, and they’re harder to obtain.”

Jorrey performs a lot of emergency work on broken water mains, and it counts on its Cat dealer to keep equipment up and running in the field.

“I can call them on a Sunday afternoon and tell them my location and what I need, and they always come through for us,” Chris says. “That’s one of the main reasons why we continue to do business with H.O. Penn. When you need service, they are excellent. It’s a partnership. Their success is based on our success, and they understand that.

“We have an excellent rapport with the service department,” he adds. “If we have an issue with a machine that is working in the field, they send a technician to our jobsite, and he takes care of it.”

Cat Product Link™ monitors machine health and sends e-mail or text alerts when there’s an issue with a piece of equipment. 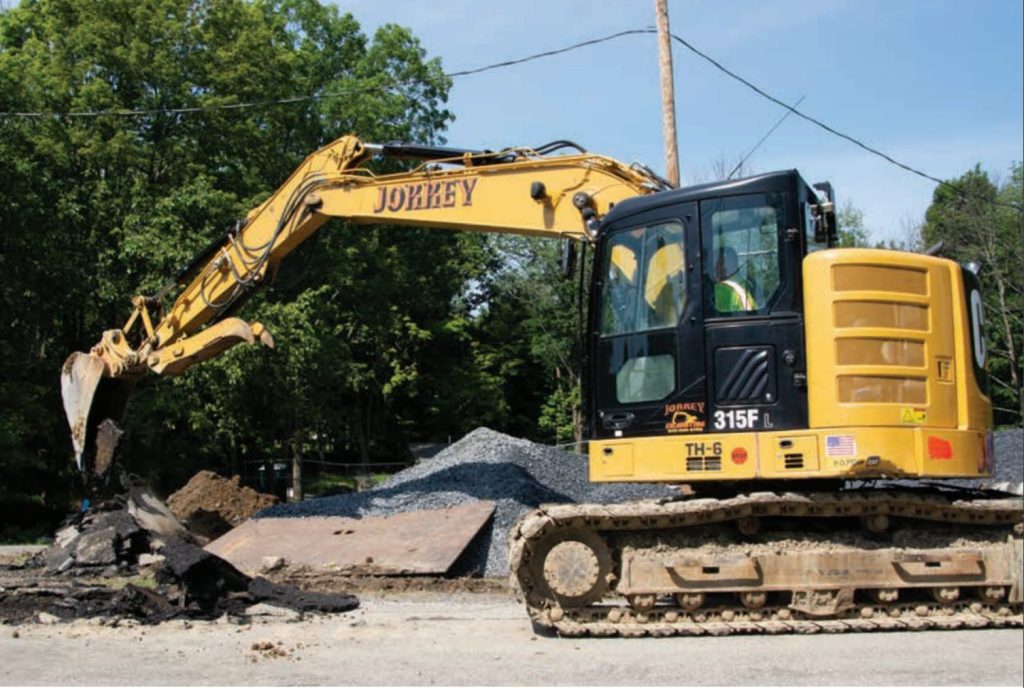 “It saved our butts a couple of times when we received fault-code notifications on our Cat 321 Excavator,” Chris says. “We were able to take the machine out of service and have it looked at before a small issue became a serious problem.”

Jorrey Excavating does mwore with less thanks to its use of versatile Cat attachments. On its compact machines, the contractor utilizes various attachments, including a broom, power box rake, mulching head, and forks. For the small excavators, Jorrey attaches a thumb or a hammer, or an auger depending on the specific needs of each customer project.

“Not only do the Cat attachments save time, but they’ve also allowed us to diversify and do things that we previously had to sub out in the past because we couldn’t do them ourselves,” Chris says. “We purchased the mulching head to clear vegetation for an overhead power line project, and it really did a fantastic job.” 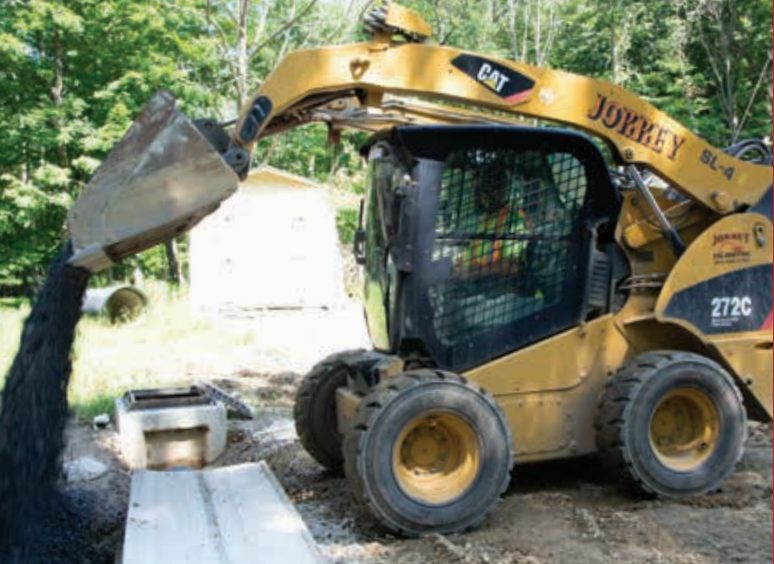 On a recent water main construction project in the Town of Monroe in the lower Hudson Valley, Jorrey crews utilized several small- and medium-sized excavators, as well as a 272C Skid Steer Loader and a 930 Wheel Loader. A Cat H55D Hydraulic Hammer mounted on an excavator was instrumental in breaking up underlying rock at the start of the project.

Jorrey foreman Chris Smith appreciates the lift capacity of the medium-size Cat excavators. The 321D LCR features the addition of a heavy lift, which increases hydraulic system pressure to 5,220 psi, giving even more lift capacity over the front. Heavy Lift is activated by depressing the soft switch on the right-hand console. As the pressure increases, the engine speed is reduced, which provides better control while lifting objects.

“We do a lot of heavy lifting with our Cat 321 to build MSE retaining walls,” Smith says. “And everybody thinks you need to get a crane to do it. But we always prove them wrong.”

As Jorrey Excavating continues to broaden its capabilities, it recently purchased a PM622 Cold Planer for milling jobs.

“This was something new to us—it represented a very specialized piece of equipment when we bought it,” Chris says. “So, Steve Skeen came out from H.O. Penn and spent quite a bit of time
to train us and increase our proficiency with the machine.”

Chris and Mary Jorrey credit their Cat dealer with helping them grow the business and achieve the level of success they’ve experienced.

“From the respect that was given to us that first time we walked into the Cat dealership, our relationship with H.O. Penn has helped us grow as a company,” Chris says. “If we didn’t have the outstanding support that we receive from our Cat dealer, we wouldn’t be where we are today.”

Adds Mary: “From a mother and young son who walked into a Cat dealership off the street looking to buy a machine and start a business, H.O. Penn has supported us every step of the way.” This story documents the importance of treating every customer with respect.