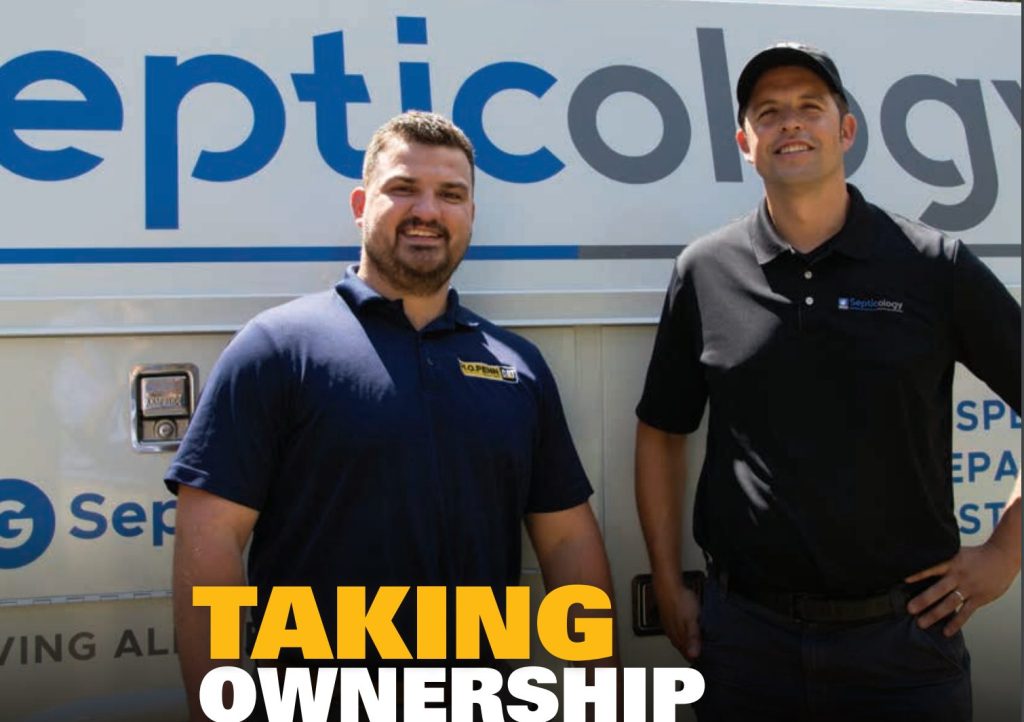 In July 2017, Daniel Dziadul launched his own septic inspection, repair and installation business, which serves customers all across Connecticut.

Septicology LLC consists of eight full-time employees and two different crews—one for inspections and the other for installation and repairs—as well as office staff. Septicology conducts anywhere from 30 to 45 septic system inspections per week.

Septicology’s inspection reports are among the most comprehensive and detailed reports in the industry. Every report includes a thorough analysis of the septic system, as well as several color photos and a drawing
of the system location, plus recommendations for repairs. If a septic tank needs to be replaced or a new septic system is needed, Septicology provides a detailed estimate and walks homeowners through the process from beginning to end.

“Most of our septic system inspections are for home sales, so we conduct pre-purchase inspections,” Dziadul says. “And then if there’s anything wrong, it’s documented in the report with any recommended repairs
listed. We also provide a quote for the recommended repairs when requested by the customer.”

Septicology also maintains an active presence on social media, which has provided increased visibility and led to new business.

“Social media is big for us. We also get a lot of work through Google,” Dziadul says. “We’ve really built up our presence on there, and we have over 500 five-star Google reviews, which is great. We have over 20,000 followers on Instagram. We post a lot of photos from all the jobsites, and people definitely love the videos. We put those up, and they can register a huge number of hits. There’s one video we posted that has almost 20 million views. Another one has 11 million views. And they’re septic
tank replacement jobs.” 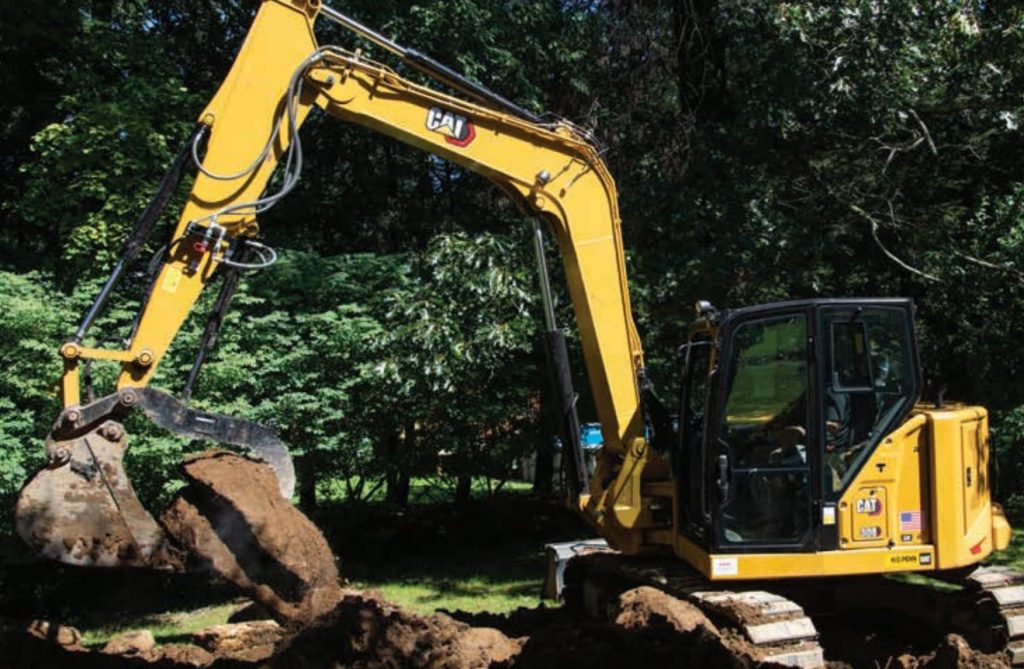 Until this spring, Septicology did all of its excavation and grading work with rental machines. But after spending thousands per week on machine rentals to keep pace with the growing volume of business, Dziadul realized it was time to buy some equipment.

“I had been trying to get in touch with somebody representing another brand of equipment,” he recalls. “And they weren’t calling back. It seemed like they didn’t want my business.”

About the same time, Reed Hofmann, a sales representative with Cat® dealer H.O. Penn, noticed on Instagram that Septicology was posting a lot of jobsite photos that appeared to involve rental machines.

“Out of nowhere, Reed walked into our office just cold calling about a week later,” Dziadul continues. “So I sat down with him, and he said, ‘I’m just wondering if you might be looking to own your own machines.’ And I said, absolutely. It was perfect timing.”

Initially, Dziadul was interested in acquiring one or perhaps two machines.

“So we sat down, and Reed gave me the numbers,” Dziadul says. “At first, we were thinking about just getting one or maybe two machines. But when he told me we qualified for the highest credit rating through Cat Financial, I asked how much it would be to buy more machines.

“He ran the numbers, and financially, it was a no-brainer. Plus, now we have equity in the equipment. And the interest rate was phenomenal. The entire process was excellent. Within five weeks of Reed walking into my office for the first time, we owned four Cat machines in June.” 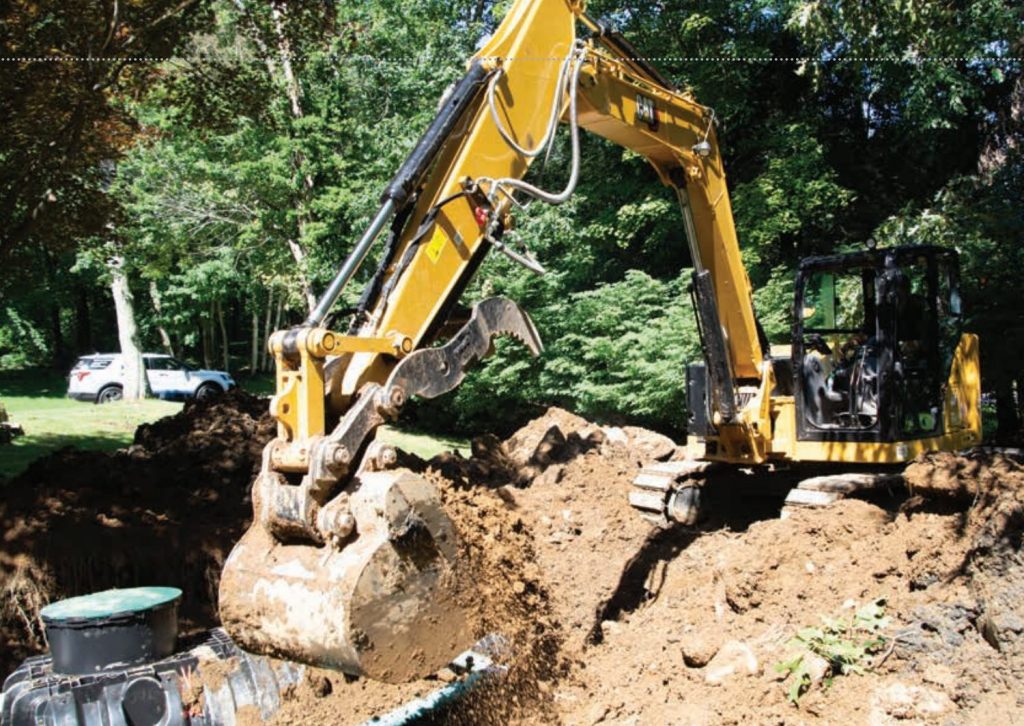 Hofmann came to Septicology’s office the day the first machine was delivered to familiarize Dziadul with its basic operation.

“And he walked me through everything,” Dziadul says. “And then he went out to the jobsite with our crew and did the same thing. He showed our guys some things that they may not have known. So that was great.”

Meanwhile, a Cat 259D3 Compact Track Loader is Septicology’s do-all machine—and is utilized on just about every job for final grading.

“We’ll backfill everything with an excavator and do a rough grading with the blade on that machine, and then we use the 259 Compact Track Loader to do the finish grading,” Dziadul says. “After that we attach a Cat Landscape Rake to do a final cleanup and get the rocks out.”

Septicology encounters a lot of rocks, large and small, in the course of excavating a residential yard.

“For the longest time we would backfill, and then grade as best we could with an excavator, which was really time-consuming,” he explains. “So now we use the LR199 Landscape Rake on our 259 to run through after we regrade, and it has become a real time-saver for us.”

Septicology is on the upswing, as it grossed $1.4 million in revenue last year and expects to finish 2021 at $2 million.

“We have a great work environment, and I think everybody can see how we’re growing,” Dziadul says. “Acquiring the Cat machines is a huge part of our growth. Now we have a fleet of Cat machines backed by great dealer support, and we’ve become a real player in the market.”