Cat Equipment Helps Contractor Do the Work at West Point 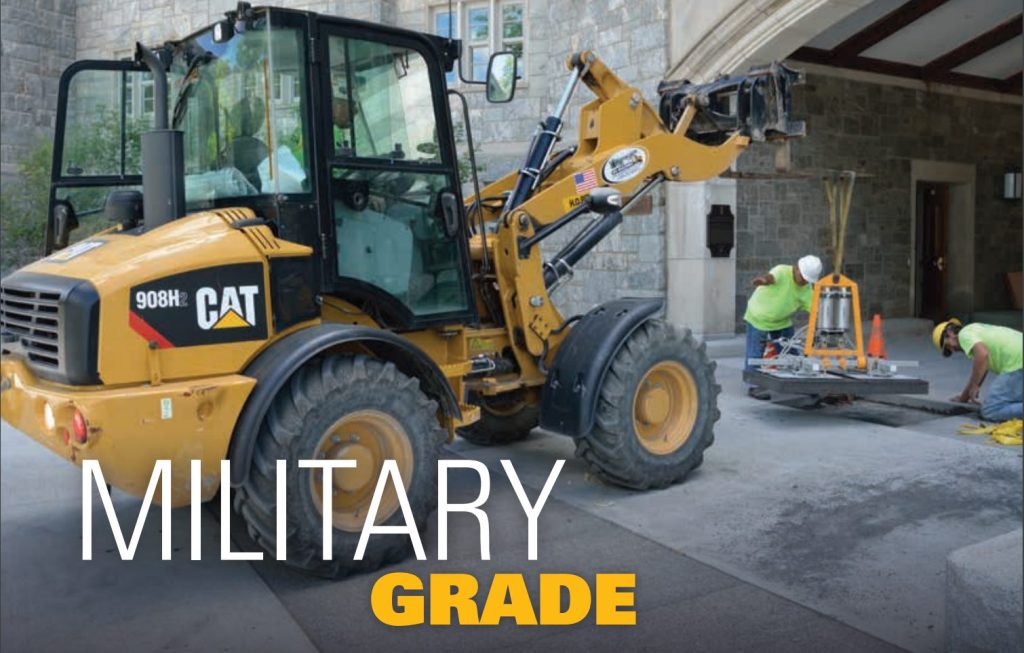 “After that job, we locked in with three or four major general contractors that hire us for certain tasks,” says Whispering Pines vice president John Leonette, who supervises field operations. “The work gradually
increased and we’ve been here ever since.”

The assignments at West Point are heady stuff for a company that started 38 years ago as a site prep contractor developing mobile home parks in the Hudson Valley.

“There’s a lot of work at West Point, and we are glad to have it,” Leonette says. “We have to go through Army Corps of Engineers training to work there. They require OSHA 10 and OSHA 30 training, something all of our crews are certfied in.” 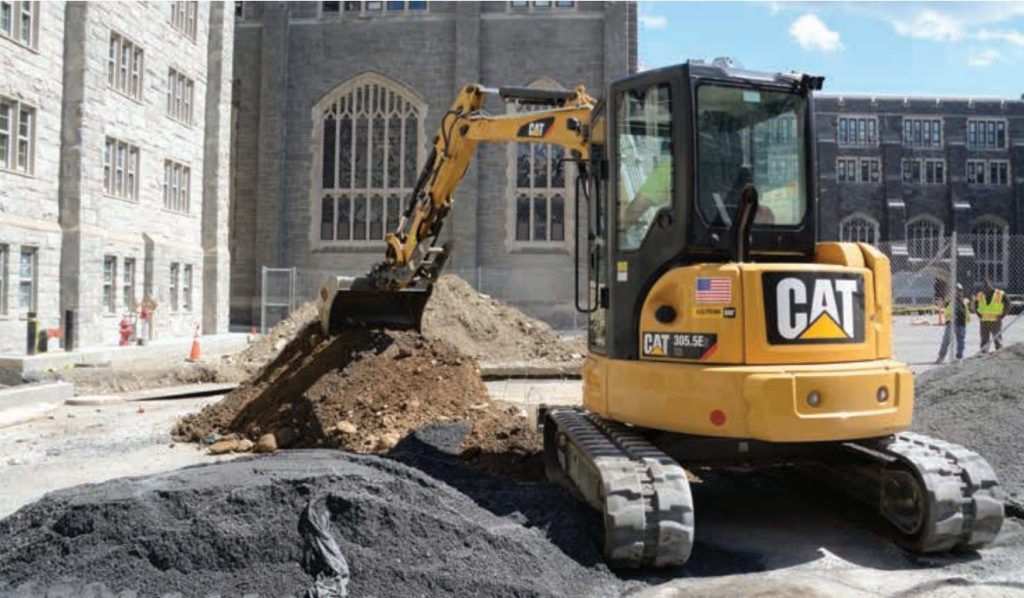 Today, Whispering Pines has 35 employees, and is headed by Leonette and his sister, Kim, who is the majority owner and president of the company. As Director of Operations/Financial Manager, Kim is responsible for financial reporting and analysis, AIA documents, LEED reporting, job budgets, cost analysis and contract review. John and Kim took over when their father, company founder John Leonette Sr., retired in 2009.

“The low ground pressure of the Cat compact machines is great,” Leonette says. “We did a sprinkler project at Trophy Point using the 287C Multi Terrain Loader and a 305.5 Mini Excavator. We had to travel on the grass to put in sprinkler piping, and we didn’t need any track mats. With the machine’s low ground pressure, we didn’t scuff up any of the existing sod. It was nice and neat project.”

At the new West Point elementary school—for which Whispering Pines performed the site prep four years ago—the contractor utilizes the 287C Multi Terrain Loader to establish the stone base for sidewalks and curbs.

Leonette likes to use the Cat 305.5E2 Mini Excavator for working in tight spaces, such as constructing drainage around buildings and for building sidewalks.

“With the zero tail swing, it’s a versatile machine that we like to use in tight quarters,” he says. “We have to go into the backyards of officers’ quarters, and the mini hex gets into tight areas like that. “There’s a lot of granite walls around here that you don’t want to scuff up, so with the tight swing radius and having the quick coupler that easily grabs different buckets, we can interchange very quickly.”

At the Arvin Annex building, where cadets train, Whispering Pines crews gutted the interior and lowered the basement floor two feet, as well as excavating new footings inside the building. A Cat 289D Compact Track Loader was utilized for both the excavation and interior demolition.

“For working indoors, the general contractor requires Tier 4 machines,” Leonette says. “And our Cat machines are well equipped to perform the work in a confined space while meeting current emissions standards.”

Whispering Pines crews removed 4,000 cubic yards of dirt from the annex. Once the dirt was hauled out, they used a 908H2 Compact Wheel Loader to load the dirt for hauloff.

The 908H2 also came in handy on another job that involved lifting granite slabs and placing them on walkways in common areas on the main campus.

“When we are setting the granite, we’re driving on the concrete and the granite slabs. And rather than use a skid steer, we have the articulating wheel loader which doesn’t scuff up and leave black marks on the granite.

“It’s very precise work, we must set them down in place within a quarter of an inch, and this machine in combination with a specialized attachment works very well for this purpose,” Leonette says.

North of West Point on the Hudson River, Whispering Pines is engaged on another demolition project for the U.S. Army at the Watervliet Arsenal. The contractor is demolishing concrete slabs and pouring new foundations for a manufacturing facility that operates lathes. The contractor purchased two 308E2 CR Mini Excavators as well as a 906M Compact Wheel Loader to complete the work.

“We have to squeeze the machines inside doorways and down fairly narrow aisleways,” he says. “Then we hammer out the floor and carry everything outside, and the smaller, compact equipment has the right size to get in, and the power and precision that we need.”

Leonette likes the way his Cat machines stand up to the wear and tear associated with working the hilly and rocky terrain of West Point.

“West Point is one of the hardest places in the Northeast to excavate and remove spoils and rock, and I can tell you from the time we’ve been using the Cat machines, they’ve held up great—no issues at all,” Leonette says. “We’ve had no problems with any stress cracks or any undercarriage issues.

“And the Cat buckets hold up real well—the pins and the bushings,” he adds. “I don’t feel that we are changing buckets as often as we were with other brands of equipment. Everything about our Cat machines is built for the extreme duty that we encounter at West Point.”

The constant digging in rocky conditions as well as hammering rock or driving on it takes a toll with any machine, Leonette says.

“So basically, before anything starts breaking or needs to be replaced, we like to trade our machines in and upgrade so there’s never any downtime,” he says.

Whispering Pines purchased Cat 320E and 336E Hydraulic Excavators after leasing the machines for 36 months. Other recent purchases include a 950M Wheel Loader, a 305E2 Mini Excavator, and a 289D Compact Track Loader.

“We started a new project with 50,000 cubic yards of spoil to be removed, and we were looking to upgrade to a fresh, clean machine for the new job. We will have these machines working on that
job for approximately two and a half years,” he says.

If he does encounter an issue with a machine in the field, Leonette knows he can depend on his Cat dealer, H.O. Penn, to get the machine back up and running.

“There have been a few times where we’ve had some downtime, and a technician from H.O. Penn came right out and serviced the machine, or they did the repair right on site,” he says. “We have a strong relationship with H.O. Penn. They get right to us—they don’t let us sit and wait for too long.”

“Our comfort level with VisionLink is high,” he adds. “If something goes wrong, a fault code is automatically sent to our service manager and he can tell us immediately what’s going on with the equipment. If there’s an issue, he can call us in the field and can let us know before the operators even know.”